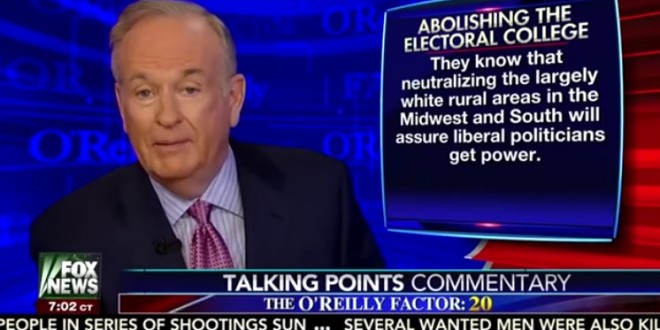 Fox News host Bill O’Reilly went on a white supremacism-laden rant Tuesday night, saying that the effort to abolish the Electoral College is an attempt by “the left” to take away power from the “white establishment.” O’Reilly went on to denounce Democrats for being “reliant on the minority vote and female voters” in their electoral coalition.

“The left wants power taken away from the white establishment and they want a profound change in the way America is run,” he said on his show, the O’Reilly Factor. “Taking voting power away from the white precincts is the quickest way to do that.” Throughout his rant, O’Reilly discounted the notion that “so-called white privilege” even exists, and said the left’s focus on race and diversity is why “white men have largely abandoned the Democrats.”

On Tuesday night, Fox News anchor Bill O’Reilly held a segment on his show that came off as a little … white supremacist. Along the way, you might expect some sort of “to be sure” paragraph to clarify that of course O’Reilly believes the votes of minority voters in California are equal to white rural voters in the Midwest. But it never comes. He instead mocked the idea of fighting against white privilege.

Previous SWAMP THINGS: Net Worth Of Trump And His Cabinet Now Greater Than The GDP Of 70 Small Countries
Next KENTUCKY: Ark Encounter Lit In Rainbow Colors Because God Hates When Homosexuals Use Rainbows