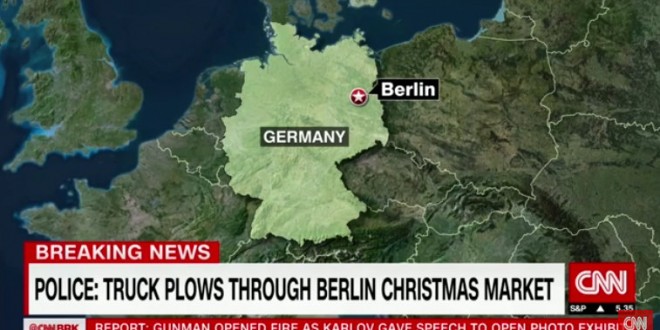 At least nine people have been killed and many more were injured, according to German police, after a truck ploughed into a Christmas market in Berlin. The vehicle, a large black Scania articulated lorry, ran into the market outside the landmark Kaiser Wilhelm memorial church on Monday evening. Local reports cited police at the scene who said initial indications pointed to a terror attack.

Police said the lorry came from the direction of Budapester Strasse, over the pavement, coming to a halt by a Christmas tree in front of the Gedächtnis Kirche, or Memorial Church. Known locally as the jagged tooth, the church was bombed in the second world war, and left more or less in its ruined state as a memorial to the victims of the war. It’s one of the most popular tourist sites in Berlin, and very close to the Berlin Zoo.

Cable news pundits are comparing the incident to the July terror attack in France, noting that the situation in Aleppo may have fueled today’s carnage just as it did earlier today in Turkey.