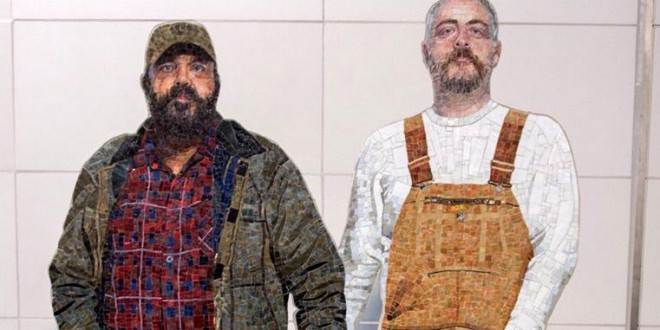 I learned about this installation a couple of weeks ago and planned on reporting on it once I could take my own photos when the new subway line officially opens on Sunday. But some of you have prodded me not to wait. From the Associated Press:

The sight of two men holding hands is far from uncommon, but a mural of two men doing just that is showing up in an unusual place — on the walls of a new subway station in New York City. That depiction of love between gay men is a rarity in public art, experts say.

“It was like winning the lottery,” Thor Stockman, 60, said of finding out that he and his husband of 3 ½ years, Patrick Kellogg, were going to be part of artist Vik Muniz’s “Perfect Strangers,” a series of life-size mosaic portraits of everyday New Yorkers gracing the walls of the new subway station at 72nd Street. But “part of me wishes that it wasn’t a rarity, that it wasn’t remarkable.”

The station on the city’s long-awaited Second Avenue subway line is scheduled to open Jan. 1. Muniz said it made sense to include the two men in a project intended to show the different people that riders are likely to encounter on their daily commutes.

Jonathan David Katz, an expert in queer art history, said he could find no other example of a permanent, non-political LGBTQ public artwork in New York City. He mentioned George Segal’s “Gay Liberation Monument” near Stonewall Inn, the site of the 1969 riots that launched the gay rights movement. But that work, featuring two men standing and two women sitting, is expressly commemorative of a political moment.

“They were just average-looking guys like us,” Stockman added. In his statement announcing the public art installations at the various stops along the new Second Avenue line, New York state governor Andrew Cuomo seemed to share in that sentiment.

“Public works projects are not just about function–they’re an expression of who we are and what we believe. Any child who has never walked into a museum or an art gallery can walk the streets of New York and be exposed to art and education simply by being a New Yorker. That is where we came from and that is what makes New York special,” Cuomo said.

Construction for the Second Avenue subway has dominated my neighborhood for the last eight years with street closures, twice daily dynamiting that went on for months, and dozens of shuttered businesses. It’s hard to believe the thing is finally finished after nearly a century of failed attempts.