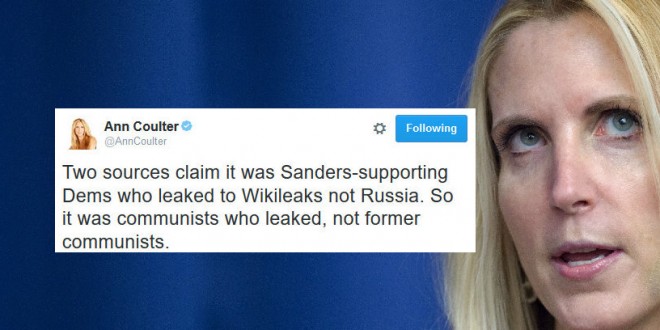 Ann Coulter: It Wasn’t The Russians

Ann Coulter tweeted early this morning that former Democratic presidential candidate Bernie Sanders was the source of the Democratic National Committee leaks and threw her followers into a frenzy in the process. Coulter claimed that two sources informed her of Sanders’ participation, adding that “it was communists who leaked, not former communists.” Most of the responses to Coulter’s tweet took a similar stance as that of the conservative pundit.

@AnnCoulter Just two sources? When you are making things up, go wild. 73 sources. Or, just name your two mysterious sources.

Previous PHILIPPINES: Self-Proclaimed Murderer President Threatens To Boot Out US Military Over Aid Package
Next SNL Hammers Trump On Putin And Tillerson [VIDEO]