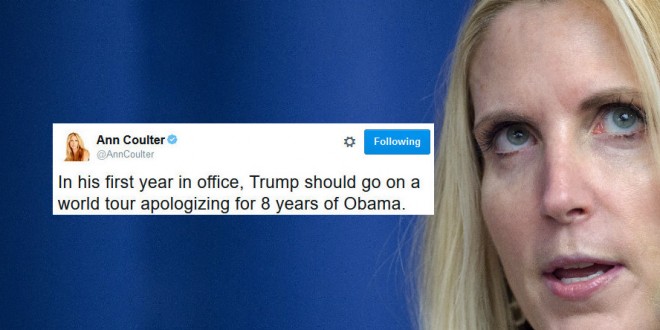 Ann Coulter, an infamous far-right attack dog who has spent years attacking the left, was at the Christmas party of a racist anti-immigration group earlier this month — the second such event she has attended since September.

On Dec. 9, Coulter made her way to the party hosted by VDARE, a white nationalist website founded by English immigrant Peter Brimelow. The site — which is named after Virginia Dare, said to be the first white child born in the New World — focuses on opposing non-white immigration into the United States, but has also published the writings of anti-Semites.

VDARE’s list of contributors, in fact, is akin to a Rolodex of the most prominent pseudo-intellectual racists and anti-Semites. They include names like Jared Taylor, who once wrote that black people are incapable of sustaining any kind of civilization; Kevin MacDonald, a retired professor who wrote a trilogy claiming that Jews are genetically driven to undermine the Christian societies they often live in; and the late Sam Francis, a white nationalist ideologue who wrote several key racist books.

Brimelow, along with Jared Taylor and Richard Spencer, who heads a racist think tank called the National Policy Institute, is very much part of the so-called Alt-Right. The Alt-Right is basically a rebranding of white racial nationalism for public relations purposes.

During the Republican Convention, tweets from VDARE appeared twice on the arena’s news ticker.