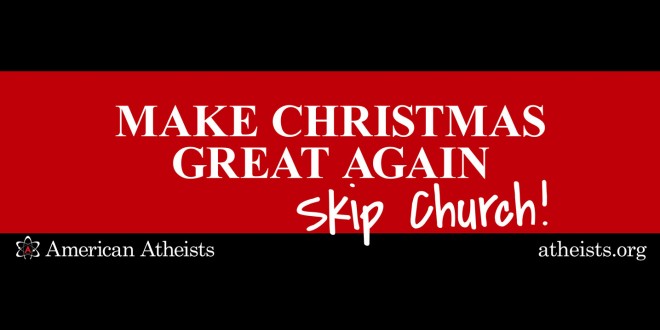 American Atheists just revealed their 2016 holiday billboard campaign. Once again, they’re urging people who are on the fence about religion to skip church. The first sign, riffing on Donald Trump‘s campaign slogan, says “Make Christmas Great Again — Skip Church!” The billboard will be up throughout December in Lynchburg, Virginia, and Shreveport, Louisiana, two Republican strongholds. It’s also a way to push back against Trump’s campaign promise to force stores to say “Merry Christmas” instead of “Happy Holidays.” The other billboard features a conversation between two people, one telling the other that she plans to skip church this Christmas and her parents will just “get over it.” That billboard will be up during December in Colorado Springs, Colorado; Lynchburg, Virginia; Atlanta, Georgia; Shreveport, Louisiana; and Georgetown, South Carolina. Previous PHILADELPHIA: Police Release Images Of Suspect In Bombing That Severely Injured Gay Man [VIDEO]
Next Two Of CNN’s Crazy “Facebook Told Me So” Lunatics Were Actually Delegates For The Trump Campaign