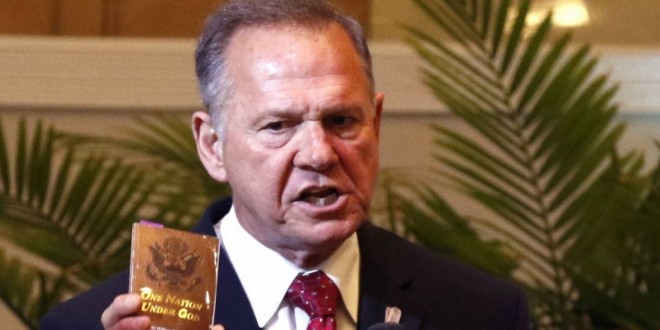 Four amicus briefs have been filed on behalf of Chief Justice Roy Moore, who was given an unprecedented judicial suspension when the Court of the Judiciary (COJ) unlawfully suspended him on September 30 for the remainder of his term, which runs through January 2019.

The first brief is from a group of eight Alabama trial court judges who argued that the COJ’s attempt to avoid the unanimity requirement for removal under Rule 16 sets a dangerous precedent for disciplinary actions against judges in Alabama.

The second brief was filed by the United States Justice Foundation. That brief states that (1) it was improper to use Chief Justice Moore’s 2003 case as evidence of his intent to order probate judges to disregard federal orders in this case, (2) that the plain text of the Administrative Order at issue in this appeal does not support the COJ’s conclusions, and (3) that the JIC did not meet its burden to establish Chief Justice Moore’s guilt by clear and convincing evidence.

The third one was from Sanctity of Marriage Alabama. That brief argued that the scope of the Supreme Court’s authority to review certain matters has always been a matter of legitimate dispute and that it is a legitimate question as to whether the Supreme Court can automatically bind all states to its decisions, regardless of whether those states were parties to the case. It also argued that such questions are not the proper subjects of ethical decisions.

Richard Lawrence, who is an Alabama licensed attorney, filed the fourth brief. His brief argues that the Supreme Court did not have subject matter jurisdiction to decide Obergefell and that the jurisdictional question needed to be addressed. The brief argued that the Chief Justice’s Administrative Order merely recognized that the Alabama Supreme Court could have addressed this issue, which he believes was an open question at the time of the Administrative Order.

Sanctity Of Marriage Alabama appears to be affiliated with the League Of The South, a white supremacist group which recently “celebrated” the 150th anniversary of the assassination of Abraham Lincoln.

The United States Justice Foundation is perhaps most notable for their declaration that the US has the right to assassinate foreign leaders they don’t agree with. Their website is almost entirely devoted to opposition of same-sex marriage.