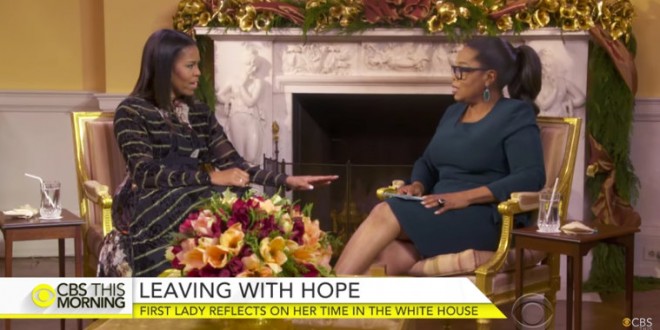 The clock is ticking down to the first family’s departure from the White House — but first, Michelle Obama is giving her last interview as first lady to Oprah Winfrey.

In a preview of the CBS and OWN special, aptly titled First Lady Michelle Obama Says Farewell to the White House — An Oprah Winfrey Special, Winfrey asks Obama about one of her husband’s core message as president. “Your husband’s administration, everything, the election was all about hope,” she says. “Do you think this administration achieved that?”

“Yes, I do,” answers Obama. “Because we feel the difference now. See, now we’re feeling what not having hope feels like, you know? Hope is necessary. It’s a necessary concept. And Barack didn’t just talk about hope because he thought was just a nice slogan to get votes. He and I and so many believe that what else do you have if you don’t have hope? What do you give your kids if you can’t give them hope?”

Previous Obama Vows To “Take Action” Against Russia [VIDEO]
Next All You Want For Christmas Is Carpool Karaoke With Mariah, Adele, Gaga, Elton, And Many More [VIDEO]