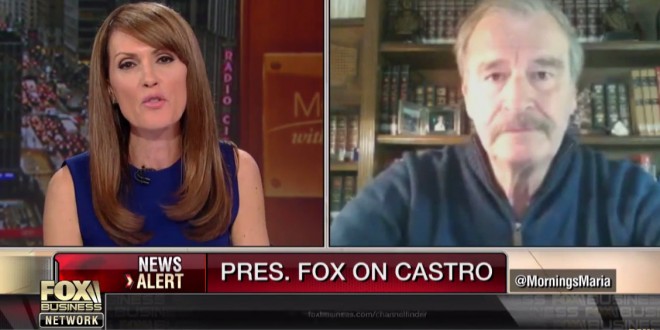 YOU TAKE THAT BACK: Fox Host Flips Out After Former Mexican President Compares Trump To Castro [VIDEO]

Former Mexican President Vicente Fox is comparing Donald Trump to Fidel Castro, saying the president-elect is “very similar” to totalitarian leaders. “Cuba is going to be a great Latin American nation as soon as they get rid of the Castros,” Fox told host Dagen McDowell on Fox Business Network’s “Mornings with Maria” Tuesday. “So nobody needs dictators.

McDowell quickly rebuked Fox for linking Trump to Castro, a Communist figurehead and longtime antagonist of the U.S. who died last weekend. “Comparing Donald Trump to Fidel Castro is beyond the pale,” she said. “Fidel Castro was a murdering thug who tortured people, who imprisoned people. Quite frankly, Mr. President, I ask you to take that back, comparing Fidel Castro to Donald Trump.”

Fox refused to reverse course, however, instead doubling down on the comparison. “No, I don’t take it back, I insist,” he said. “They are similar — authoritarian, they impose their wills, they only they think that they have the right and the reason.