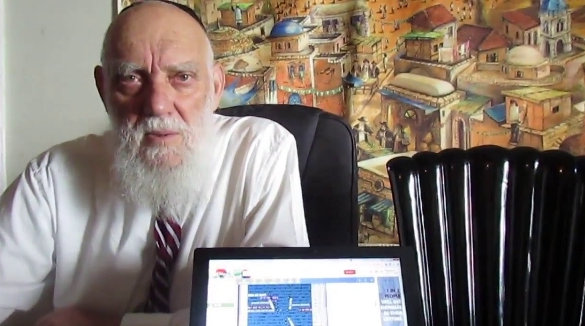 Forget what the polls and the pundits are saying. The answer to who will win Tuesday’s presidential election is in the Bible, says an Israeli rabbi. Hillary may as well give her concession speech now. Rabbi Matityahu Glazerson, an international Bible codes expert who has written 30 books, says it’s a fait accompli for Donald Trump. He will beat Hillary Clinton on Nov. 8 and go on to become the next president of the United States.

Glazerson sees Trump as a leader in the mold of Cyrus the Great of Persia, who helped free the Jewish people from Babylonian captivity in Old Testament times. They were then able to rebuild the Temple in Jerusalem. Any international leader who helps the Jewish people is a type of “moshioch” or a messiah figure, he says in a three-minute video posted in late October to YouTube. Not the Messiah but a messiah.

Glazerson highlights the codes for 8 Cheshvan 5777, the date on the Hebrew calendar that corresponds to Nov. 9, 2016 – the first day Trump would be president-elect of the United States. Glazerson found his second group of codes in the Book of Numbers. He opens the video with what he calls “the best meeting” of Donald Trump, spelled in Hebrew, and bocher, which means chosen or elected. In this table he again found codes for nasi (president), Artzot haBrit (United States) and 7 Cheshvan 5777, which corresponds to Tuesday, Nov. 8, 2016.

A well-known Bible-code researcher has bad news for Barack Obama, as he claims hidden texts in the Holy Bible indicate Mitt Romney will be America’s next president. Moshe Aharon Shak, an orthodox Jew and author of “Bible Codes Breakthrough,” has produced a series of videos on YouTube with his modern analysis of Scripture. For those not familiar with Bible codes, they are said to be secret messages embedded in the Torah, the first five books of the Old Testament.

Those who claim the codes’ validity say they disclose information about both the past, as well as the future. The messages are decoded when a computer is used to search in a certain pattern, such as every fourth or fifth Hebrew letter within a given matrix. “The matrix is found in Deuteronomy Chapter 28, verses 13 and 14,” says Shak, a mechanical engineer from Montreal, Canada. “There we find his first name, last name, day and month of birth, and the term ‘president.’ Fifteen terms consisting of 85 letters are found telling a fascinating story.