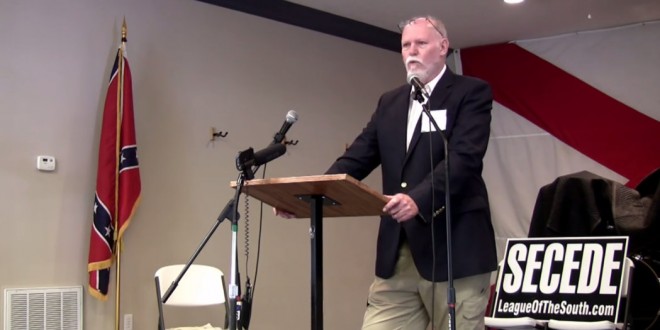 White Supremacist Leader: Trump’s Victory Means We Now Can Drive A Stake Into Jews And Minorities

“Once the globalist-progressive coalition of Jews, minorities, and anti-white whites stops reeling in confusion from the results of yesterday’s election, we can expect them to start striking back with trickery and violence. Thus, we as Southern nationalists face both danger and opportunity.

“Now, more than ever, we need tight organization and numbers to help drive a stake through Dracula’s heart and keep him from rising once again to menace our people and civilization. No mercy should be shown to the enemies of our God, our Folk, and our civilization. None would be afforded us.

“I have been praying that God’s will would be done in this election, whichever way it swung. Now that we have a clear outcome, we trust in Him and make the best of the situation before us. May we move ahead with wisdom, discernment, and good judgment in all things.

“If you are not yet a member of The League of the South, now would be a good time to add your efforts to ours in this fight for a free and independent South and the destruction of our ancient enemies.” – Michael Hill, president of the League Of The South, which advocates for southern states to secede to form an all-white nation.

RELATED: The League Of The South provides the signs at protest rallies in support of deposed Alabama Supreme Court Chief Justice Roy Moore.