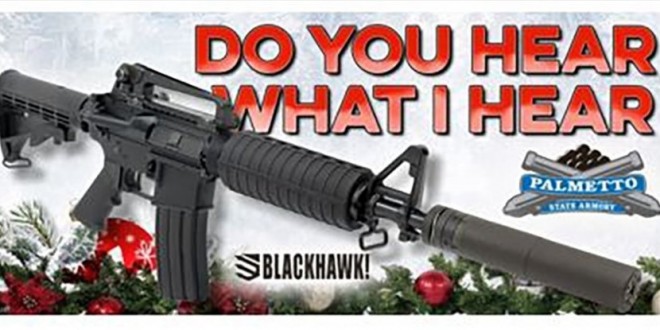 A Columbia gun dealer is launching its controversial Christmas billboard campaign for the third year, and says its goal is to “start conversation about the role of firearms in the American household.” A release from Palmetto State Armory said the campaign is designed to lead to conversation about guns in a “positive and lighthearted manner.”

“The purpose of this campaign is to not only bring attention to Palmetto State Armory during the holiday shopping period, but also to start conversation about the role of firearms in the American household in a positive and lighthearted manner. The Second Amendment has been on the front burner of political conversation for quite some time now and PSA as a company wants to make sure the right message is relayed.”

The ads will run statewide, including in Greenville, Columbia, Hilton Head and Charleston. The company says many people have contacted them wondering if they were going to repeat the campaign. The release said: “To those individuals who do not agree with the campaign, we respect their opinions and think that the right to vocalize one’s beliefs is what makes this country so great. Palmetto State Armory is honored to have the resources to start an educated and respectful conversation between both parties.