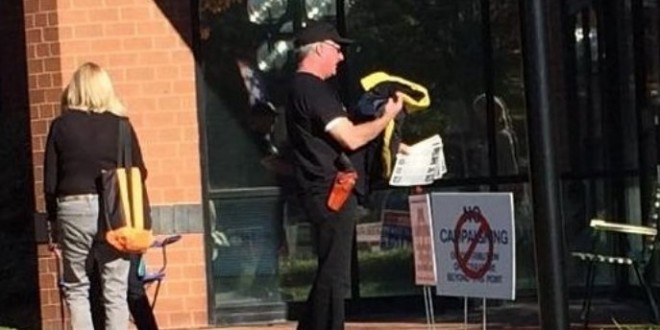 A man wearing a Donald Trump shirt and carrying a weapon stood outside a voting location in Loudoun County, Virginia, on Friday. Authorities in the nation’s richest county are apparently OK with that.

Erika Cotti encountered the man when she went to vote at the county’s registrar’s office, she told The Huffington Post. Virginia doesn’t have early voting per se, but voters can cast in-person absentee ballots for a host of reasons, like if they’re going to be out of the county or city on Election Day.

“I had my 9-year-old son with me. I felt intimidated,” Cotti said. “And I had to explain to my 9-year-old why a man with a 357 magnum is standing outside the polling station.” Cotti said the man offered her a Republican sample ballot, which she declined.

“He’s like, ‘Who are you going to vote for, crooked Hillary?’ And I was like, that’s really none of your business,” Cotti said, adding that the man was standing in the sidewalk outside of the office when they left and blocking their path.

Judy Brown, Loudoun County registrar, confirmed that the man was standing outside her office in Leesburg and handing out GOP literature.

Authorities say they can do nothing because Virginia is an open carry state and the man stood inches outside the mandated “no canvassing” zone.