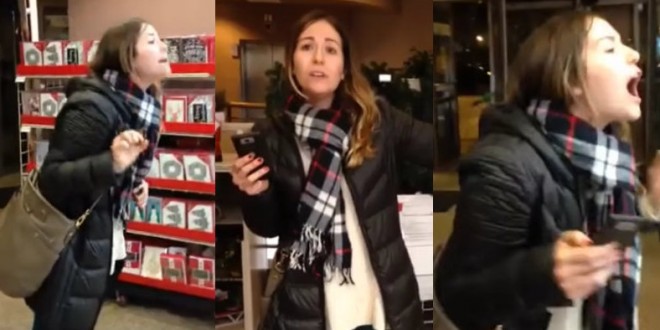 A disturbing video filmed last week reportedly shows a woman go on an extended shouting tirade against shoppers and African-American employees at a Michael’s in Lakeview last week. In the clip, the woman is seen shouting pro-Trump taunts and swearing at numerous people in the vicinity, including what appears to be the store manager.

According to a Facebook post by Jessie Grady—the bystander who filmed the scene—the woman began shouting after a black employee asked her if she wanted to purchase a bag for her larger items. The incident reportedly took place Wednesday night “Why don’t you shut your face?” the woman is heard shouting at the beginning of the video. “And I voted for Trump, so there. You gonna kick me out because of that? And look who won!”

As the video continues, the woman repeatedly yells that she is being discriminated against, confronts Grady as she films, accuses Grady’s child of stealing, and refers to Michael’s employees as “animals.” According to Grady’s post, several people in the store—including herself—phoned police, but the woman had already left by the time authorities arrived, some 45 minutes after calls were placed.

This incident is the just the latest in a recent spate of obscene and racist tirades by Trump supporters. Last week a Trump fan abused black employees of a Miami Starbucks and over the weekend a viral video showed a Delta Airlines passenger screaming about “Hillary bitches.” Yesterday Delta apologized for not removing the man. Also this weekend a Colorado home supply store fired its manager for calling a customer a “faggot who voted for Hillary.”