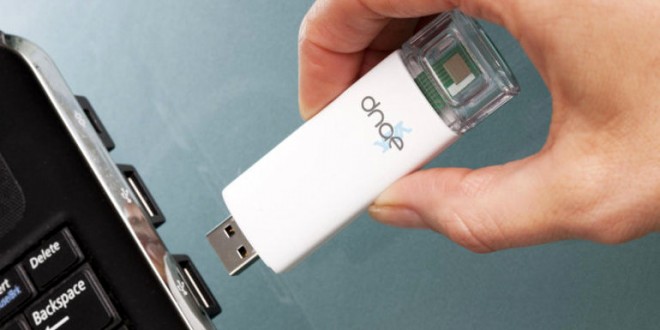 Scientists in the UK have developed a USB stick that can quickly and accurately measure the amount of HIV is in a patient’s blood. The medical device was created by scientists at Imperial College London and tech firm DNA Electronics, and all it needs is a simple drop of blood to measure HIV-1 levels. It then creates an electrical signal that’s fed into a computer, laptop, or handheld device. The disposable test could be used by HIV patients to monitor their own treatment and help patients in remote regions of the world, where more standard HIV tests are inaccessible.

Published in the journal Scientific Reports, results show that the USB stick is highly accurate, and it can produce a result in under 30 minutes. Current tests to detect the amount of HIV in the blood can take as much as three days, requiring patients to send blood samples to a lab. In the latest research, the USB stick tested 991 blood samples with 95 percent accuracy, with an average time to produce a new result just shy of 21 minutes.

While most people on HIV therapy have an undetectable viral load and are therefore believed not to be infectious, regular monitoring is critical to detect any development of resistance to the medications. Hit the link for details on the technology behind the device.