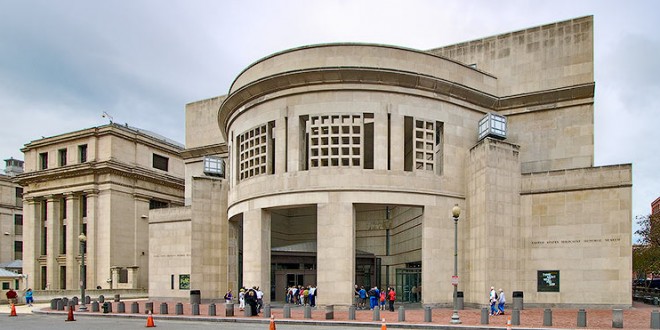 The US Holocaust Memorial Museum in Washington on Monday condemned a white nationalist conference that took place just down the road over the weekend. At the meeting, the prominent white supremacist Richard Spencer gave an anti-Semitic speech that was met with applause and Nazi salutes, as well as shouts of “Heil victory!”

“The Holocaust did not begin with killing; it began with words,” the museum staff said in a statement. They added a call to “all American citizens, our religious and civic leaders, and the leadership of all branches of government to confront racist thinking and divisive hateful speech,” seeming to reference President-elect Donald Trump’s not having publicly distanced himself from the racist leaders and groups that support him.

The statement followed the news that federal property, the Ronald Reagan Building and International Trade Center, had been used as a venue for a conference hosted by the National Policy Institute (NPI). NPI is a think tank known for promoting white nationalist views, and its president, Richard Spencer, has taken credit for coining the term “alt-right,” a euphemism for far-right extremism in the United States.

Outrage over Spencer’s comments at the conference were still reverberating across the country on Monday, after video surfaced of him referring to the mainstream media as the “Lügenpresse” or “lying press,” a term used by Nazis to discredit journalists who reported their atrocities. He then employed the well-worn conspiracy theory of a Jewish plot to control politics, this time by skewing reporting against Trump.

“One wonders if these people are people at all, or instead soulless golem,” questioned Spencer. He then called Trump’s success a “victory of will,” an allusion to “Triumph of the Will,” the famous Nazi propaganda film directed by Leni Riefenstahl.

Here is the full statement:

The United States Holocaust Memorial Museum is deeply alarmed at the hateful rhetoric at a conference of white nationalists held on November 19 at the Ronald Reagan Building just blocks from the Museum.

According to press reports, Richard Spencer, the leader of the National Policy Institute – a white nationalist think tank – that sponsored the conference, made several direct and indirect references to Jews and other minorities, often alluding to Nazism. He spoke in German to quote Nazi propaganda and refer to the mainstream media. He implied that the media was protecting Jewish interests and said, “One wonders if these people are people at all?” He said that America belongs to white people. His statement that white people face a choice of “conquer or die” closely echoes Adolf Hitler’s view of Jews and that history is a racial struggle for survival.

The targeting of Jews was central to Nazi racist ideology. The Germans attempted to kill every Jewish man, woman and child they could find. Nazi racism extended to other groups. By the end of World War II, the Germans and their collaborators had murdered six million Jews and millions of other innocent civilians, many of whom were targeted for racial reasons.

The Holocaust did not begin with killing; it began with words. The Museum calls on all American citizens, our religious and civic leaders, and the leadership of all branches of the government to confront racist thinking and divisive hateful speech.

The United States Holocaust Memorial Museum, a living memorial to the Holocaust, inspires citizens and leaders to confront hatred, prevent genocide, and promote human dignity. Its far-reaching educational programs and global impact are made possible by donors nationwide.