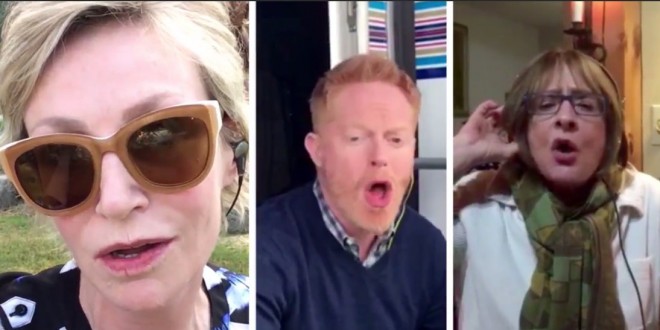 I insist that you watch this. Via Slate:

With just days until the presidential election, celebrity voter public service announcements are being churned out as quickly as celebrities can make them. A new “We Are the World”–style anthem from Funny or Die is the latest to tell voters to go vote—and tells them who not to vote for. Crazy Ex-Girlfriend’s Rachel Bloom both created and leads the desperate and profane anthem, called “Holy Shit (You’ve Got to Vote),” joined by Elizabeth Banks, Moby, Adam Scott, Jaime Camil, Naya Rivera, Jesse Tyler Ferguson, Jane Lynch, Patti LuPone, and more.

With lyrics like “If we don’t work to prevent this/ it’s four years of The Apprentice” and “Donald Trump is human syphilis/ we could be the antidote,” this is definitely not a nuanced entreaty to the unconverted. Bloom told Entertainment Weekly that her goal isn’t necessarily to get Trump voters to change their minds but to mobilize people who might not vote at all. “If this video motivates one person, especially in a swing state, to just get out there, then it will have been worth it.”