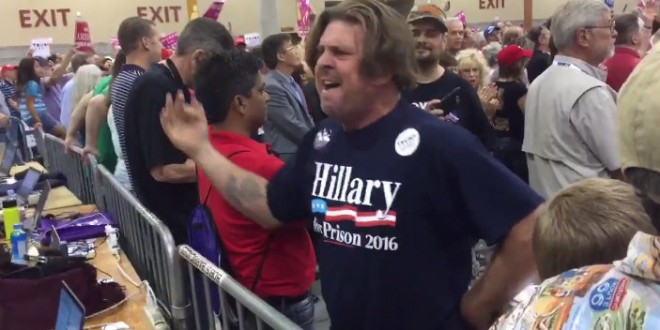 Trump Fan: I Wasn’t Saying “Jew-S-A” – I Was Saying “USA” With A Spanish Accent In Solidarity With Latins

Reality has again hit George Lindell, this time with a video of him chanting at a Donald Trump rally in Phoenix garnering multiple views, or going viral (in the parlance). The Phoenix man spent Monday trying to explain why his chanting what sounded like “Jew-S-A” at the Saturday rally was not meant as a slur.

“I want to talk to everybody,” Lindell said Monday. He’s a painter for hire and had a job scheduled, but he put it off so he could respond. Local television stations were calling, so were national websites. He said CNN was trying to arrange something.

Lindell needed to do the interviews, he said, to counter what people are saying about him. “They’re calling me racist, calling me all kinds of names.” Lindell insists his chant was not a reference to the Jewish people or religion. He would not do that, he said. He would not denigrate an entire group of people.

“We’re all created equal,” he said. “We’re all different.” Lindell said he has a rational explanation for his chant. What sounded like “Jew,” was in fact, he said, a chance to show allegiance with Spanish speakers who chant the country’s initials with a heavy accent.

Lindell has no television. He spends his nights listening to audio versions of the Bible and the Gnostic Gospels, accounts of Jesus Christ that are not in the canon. His has developed a complex theory about the international cabal that controls the U.S. government. The corruption, he says, stretches back to the beginning of the country. Biblical clues hint at either this country experiencing sevenfold wealth with Trump’s election, or disappearing.

How does he explain the Nazi hand signal?

RELATED: The first line above about “reality” is a reference to a 2011 viral video in which Lindell animatedly described a car accident to local reporters by saying, “Reality hits you hard, bro!” The line became a catch phrase on sports shows for several months that year. Lindell attempted to monetize the phrase with a now defunct website and t-shirts.