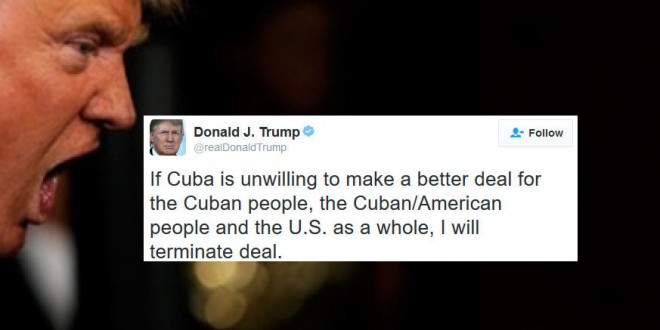 President-elect Donald Trump said Monday he will reverse President Obama’s thaw with Cuba if the island nation’s government does not make reforms. Trump is pledging to follow through on a campaign promise to undo Obama’s decision to open diplomatic and commercial ties with Cuba if the communist government doesn’t adopt changes.

The statement comes less than three days after the death of former Cuban leader Fidel Castro. In a statement on Saturday marking the longtime U.S. adversary’s passing, Trump did not comment on whether he would roll back Obama’s policies. Trump can erase nearly all of Obama’s Cuba policies himself since they were made by executive action and not an act of Congress.

If Cuba is unwilling to make a better deal for the Cuban people, the Cuban/American people and the U.S. as a whole, I will terminate deal.