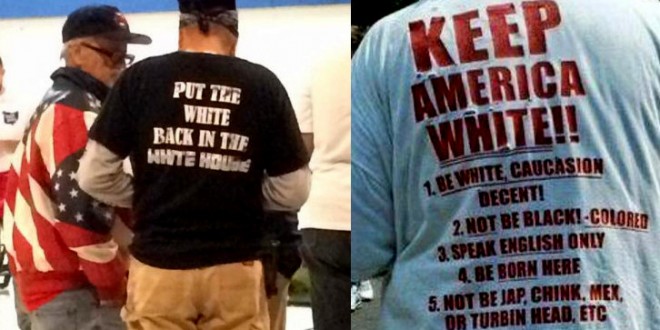 The above two images are being widely shared on Twitter today as reports come in about voter intimidation attempts by presumed supporters of Donald Trump. From the Washington Post:

Voters in Florida, a key battleground, have reported multiple accounts of voters saying they have encountered aggressive, intimidating behavior, according to a nonpartisan group monitoring election issues nationwide.

“In Florida we continue to receive a substantial amount of complaints about voter intimidation,” said Kristen Clarke, president of the Lawyers’ Committee for Civil Rights Under Law, the group running an independent effort to field voter complaints and questions.

Clarke said her group received reports from Miami-Dade County of “yelling, people using megaphones aggressively.” In Jacksonville, in the northeast corner of the state, Clarke said, “an unauthorized individual was found inside [a] polling place.”

This person was at St. Paul’s Methodist Church, a polling precinct in what Clarke described as a part of Jacksonville with predominantly black residents.

“He was asked to leave and refused,” she said. “Through our intervention and calls, that individual has been removed. Unauthorized individuals have no place in the polls.”

During early voting, Clarke’s group also received reports from Hollywood, Fla., about “aggressive individuals hovering around individuals as they approach the polling site,” she said during a briefing with reporters. “Some have turned away because they did not feel able to freely cast [a] ballot.”