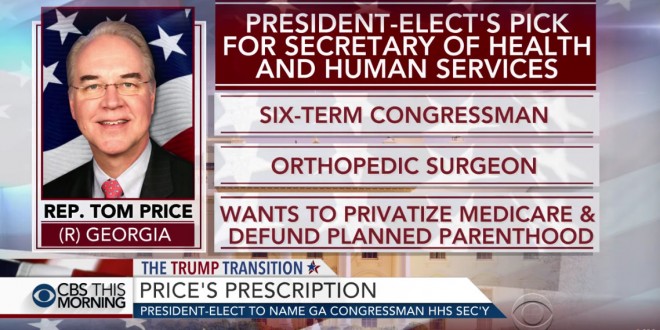 President-elect Donald Trump announced Tuesday that he will nominate Georgia Rep. Tom Price to head the Department of Health and Human Services. The Cabinet-level pick, which requires Senate confirmation, inserts one of Obamacare’s most outspoken critics into the key position to dismantle it and help Republicans implement their own blueprint for health care reform.

“Chairman Price, a renowned physician, has earned a reputation for being a tireless problem solver and the go-to expert on healthcare policy, making him the ideal choice to serve in this capacity,” Trump said in a statement. “He is exceptionally qualified to shepherd our commitment to repeal and replace Obamacare and bring affordable and accessible healthcare to every American.”

Price joined Trump at his campaign speech on health care reform earlier this month, and issued a statement praising Trump’s commitment to “fully repealing this failed law.” “On November 8th, I’ll join the people of Georgia in supporting Donald Trump for president,” he said at the time. “He has committed to fully repealing this failed law and as the author of legislation that does just that, I look forward to working with the Trump Administration to make healthcare more affordable and accessible.”

Price will arrive with at HHS with a clear blueprint for what comes next. He is the author of the Empowering Patients First Act, one of the most thorough and detailed proposals to repeal and replace Obamacare. He’s the HHS secretary you’d pick if you were dead serious about dismantling the law.

It would replace the law with a plan that does more to benefit the young, healthy, and rich — and disadvantages the sick, old, and poor. Price’s plan provides significantly less help to those with preexisting conditions than other Republican proposals, particularly the replacement plan offered by House Speaker Paul Ryan (R-WI). The biggest cut to the poor in Price’s plan is the full repeal of the Medicaid expansion, a program that currently covers millions of low-income Americans, which Price replaces with, well, nothing.

This continuous coverage policy shows up in a lot of the Republican replacement plans, and is likely something we’ll hear lots of debate about in the coming months. It’s part of House Speaker Paul Ryan’s Obamacare replacement plan, as well as Sen. Finance Chair Orrin Hatch’s proposal.