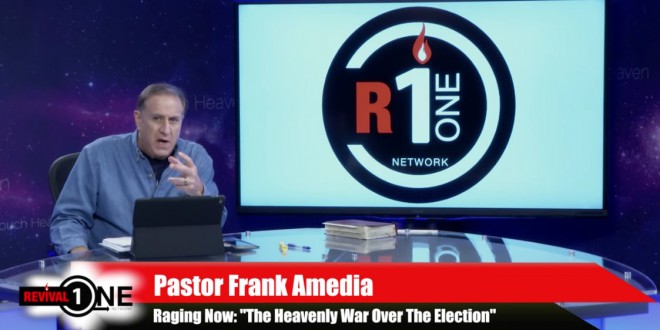 Back in September, Donald Trump headlined a Christian conference hosted by Pastor Frank Amedia, who claims that he saved countless lives in Hawaii by praying away a tsunami. Well, Pastor Amedia has had another vision from White Jesus. Via Right Wing Watch:

In a livestreamed sermon on Sunday, Amedia went into greater detail about his prophecy, saying that the “putrid liquid” feeding the nation “was crying out all of sins of self-ambition and abortion and murder and just harlotry and homosexuality and adultery and rebellion, it was just crying out lust, lust was crying out strong.” He also saw that “there were all these little hornets flying around” and he “knew immediately that that they were demons.”

“And I saw that they were dipping their tails in that putrid muck that was coming up from Abaddon and being sent out to go sting, sting with homosexuality, sting with abortion, sting with adultery, sting with it all,” he said. “They’re going out there to inject into the people of God and, I should say differently, into the world of this nation and the system of this nation that which they’ve been in assignment to do.”

But what if you’re already stung?