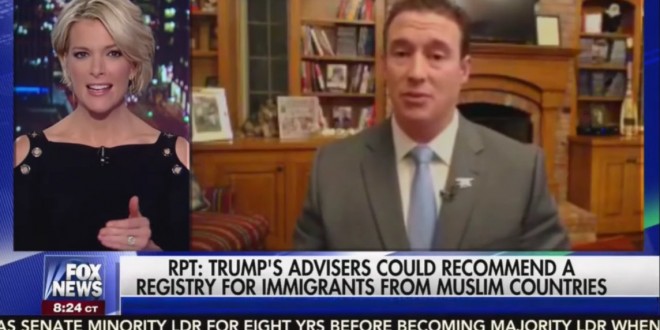 Megyn Kelly admonished a supporter of Donald Trump who invoked Japanese internment camps as precedent for a proposed registry of Muslims. On Fox News’s “The Kelly File” program on Wednesday night, Carl Higbie, a former Navy SEAL and spokesman and co-chair of Great America PAC for Donald Trump, argued in favor of the registry, which he compared to World War II-era Japanese internment camps.

Policy advisers to President-elect Donald Trump are reportedly considering creating a registry of immigrants who come to the United States from Muslim countries, Kansas Secretary of State Kris Kobach, who reportedly is a “key member of Trump’s transition team,” told Reuters on Tuesday.

“We did it during World War II with Japanese, which you know, call it what you will, may be wrong,” Higbie said, eliciting a sharp response from Kelly. “You know better than to suggest that,” Kelly said. “That’s the kind of stuff that gets people scared, Carl.”

“I’m just saying there is precedent for it,” Higbie replied. “You can’t be citing Japanese internment camps for anything the President-elect is going to do,” Kelly fired back in a raised voice.