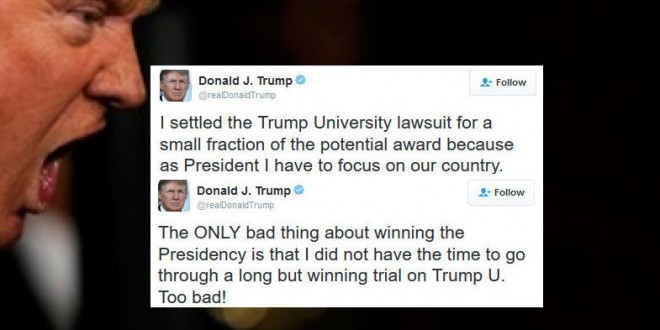 Trump: I Only Settled Those Trump University Lawsuits Because I’m Too Busy Focusing On The Country

Donald Trump on Saturday defended his decision to settle lawsuits over his Trump University real estate seminars for $25 million, saying he does not have time to fight the fraud cases in court now that he is headed to the White House.

The lawsuits cast a shadow over the Republican’s presidential campaign and led to one of the more controversial moments of his run for the White House when he claimed the judge overseeing two of the cases was biased because he was of Mexican ancestry.

While denying any wrongdoing, Trump agreed on Friday to pay $25 million to settle the lawsuits. “I settled the Trump University lawsuit for a small fraction of the potential award because as President I have to focus on our country,” Trump wrote on Twitter on Saturday morning.

“The ONLY bad thing about winning the Presidency is that I did not have the time to go through a long but winning trial on Trump U. Too bad!” He said in a second tweet.

In announcing the settlement, New York Attorney General Eric Schneiderman said the deal followed repeated refusals by Trump “to settle for even modest amounts of compensation for the victims of his phony university.”

In a statement, Schneiderman called the settlement a “stunning reversal by Donald Trump and a major victory for the over 6,000 victims of his fraudulent university.”