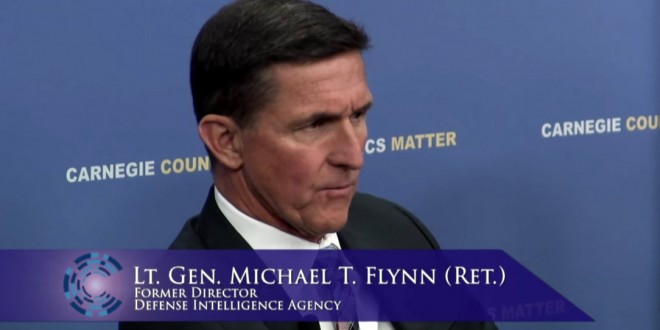 That swamp is SO drained, you guys. The Associated Press reports:

President-elect Donald Trump offered former military intelligence chief Michael Flynn the job of national security adviser as he began to build out his national security team Thursday, according to a senior Trump official. The move came as Trump made his most direct foray into foreign policy since the election, meeting with Japan’s prime minister.

Flynn, who served as the director of the Defense Intelligence Agency, has advised Trump on national security issues for months. As national security adviser, he would work in the White House and have frequent access to the president. The post does not require Senate confirmation.

The official wouldn’t say whether Flynn had accepted the job, which left open the possibility that the arrangement was not finalized. The official was not authorized to discuss the offer publicly and insisted on anonymity.

Flynn, who turns 58 in December, built a reputation in the Army as an astute intelligence professional and a straight talker. He retired in 2014 and has been a fierce critic of President Barack Obama’s White House and Pentagon, taking issue with the administration’s approach to global affairs and fighting Islamic State militants.

Donald Trump wants to forbid his officials from lobbying for foreign governments, but one of his top national security advisers is being paid by a close ally of Turkey’s president. Retired Lt. Gen. Michael Flynn, a vice chair of the Trump transition who is in the running for a top national security post in the new administration, runs a consulting firm that is lobbying for Turkish interests, an associate told POLITICO. Asked if Flynn’s firm was hired because of the general’s closeness to Trump, the associate, Robert Kelley, said, “I hope so.”

Kelley told POLITICO that the client, a Dutch consulting firm called Inovo BV, was founded by Kamil Ekim Alptekin. Alptekin is chairman of the Turkish-American Business Council, known as TAIK, an arm of the Foreign Economic Relations Board of Turkey, whose members are chosen by the country’s general assembly and economic minister. In that role, Alptekin was involved in organizing Turkish President Recep Tayyip Erdogan’s visit to Washington earlier this year.

VIDEO: At the GOP convention Flynn exhorted the crowd to chant “Lock her up!”