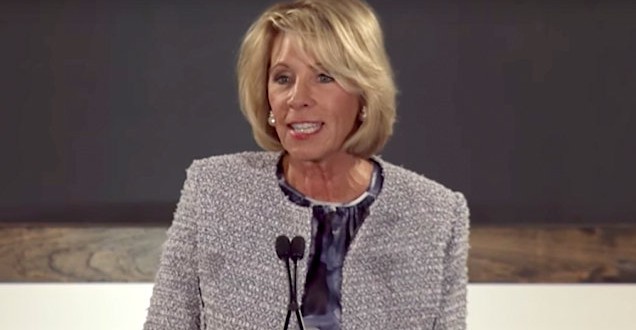 Her family is one of NOM’s most massive contributors. The Detroit News reports:

President-elect Donald Trump on Wednesday said he intends to appoint West Michigan GOP mega donor and philanthropist Betsy DeVos to be his education secretary, putting an ardent supporter of school choice in charge of the nation’s education policy.

DeVos, 58, is seen as a national leader in the school choice movement, which she has called an attempt to “empower” parents to find good schools for their children, whether they be traditional public schools in other neighborhoods, charter schools, virtual schools or private institutions.

The Douglas and Maria DeVos Foundation, financially supported by Amway president Doug DeVos, donated $500,000 to the National Organization for Marriage (NOM), an anti-gay marriage group that was one of the leading advocates against same-sex marriage initiatives in eight states. Because of that 2009 donation, gay rights activist are calling for a boycott of Ada, Mich.-based Amway, a health and beauty products company, and its affiliates including the Orlando Magic basketball team, which DeVos’ father and Amway co-founder Richard DeVos owns.