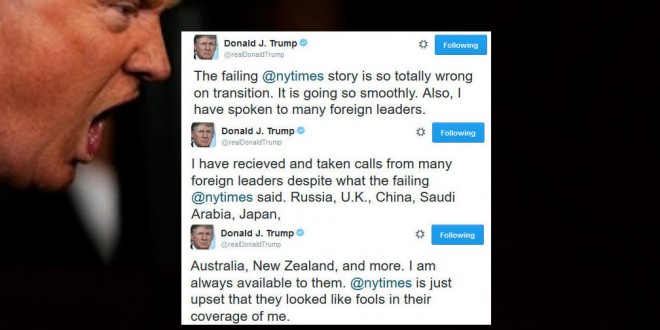 Trump Melts Down Over Transition Reports

Here’s what the New York Times is saying:

President-elect Donald J. Trump’s transition was in disarray on Tuesday, marked by firings, infighting and revelations that American allies were blindly dialing in to Trump Tower to try to reach the soon-to-be-leader of the free world.

One week after Mr. Trump scored an upset victory that took him by surprise, his team was improvising the most basic traditions of assuming power. That included working without official State Department briefing materials in his first conversations with foreign leaders.

Two officials who had been handling national security for the transition, former Representative Mike Rogers of Michigan and Matthew Freedman, a lobbyist who consults with corporations and foreign governments, were fired. Both were part of what officials described as a purge orchestrated by Jared Kushner, Mr. Trump’s son-in-law and close adviser.

The dismissals followed the abrupt firing on Friday of Gov. Chris Christie of New Jersey, who was replaced as chief of the transition by Vice President-elect Mike Pence. Mr. Kushner, a transition official said, was systematically dismissing people like Mr. Rogers who had ties with Mr. Christie. As a federal prosecutor, Mr. Christie had sent Mr. Kushner’s father to jail.

Prominent American allies were in the meantime scrambling to figure out how and when to contact Mr. Trump. At times, they have been patched through to him in his luxury office tower with little warning, according to a Western diplomat who spoke on the condition of anonymity to detail private conversations.

The disarray has left agencies virtually frozen, unable to communicate with the people tasked with replacing them and their staff. Trump transition team officials were a no-show at the Pentagon, the Washington Examiner reported. Same goes for the Department of Energy, responsible for keeping the nation’s nuclear weapons safe, where officials had expected members of the Trump transition team on Monday. Ditto for the Department of Transportation. Over at the Justice Department, officials also are still waiting to hear from the Trump team.

“The Department began planning for this transition well before the election and we are fully prepared to assist the incoming transition team,” Justice Department spokesman Wyn Hornbuckle said in a statement. “As the President has said, we are committed to a smooth and successful transition, including the seamless continuation of the department’s essential law enforcement and national security functions which are performed each and every day by its career staff.”

The transition dysfunction extends beyond failure to promptly execute a memorandum of understanding. According to several sources close to the Trump transition team and inside the Obama administration, the president elect and his staff have had difficulty finding able-minded Republicans willing to take on critical posts. One Democratic source, who like others would only discuss sensitive talks on condition of anonymity, said transition officials had been informally asking Obama political appointees to recommend Republicans to take over their jobs.

Other administration officials said conversations had not gotten to that point of desperation quite yet. But they acknowledged the pace of getting people in line for critical posts was moving painfully slowly. The problem is twofold: Trump and his staff are not creatures of the establishment and are naturally skeptical of those who are. At the same time, many Republican lawyers and government officials who would have jumped at the opportunity to work in a GOP administration are balking at employment under Trump and his cabinet picks.