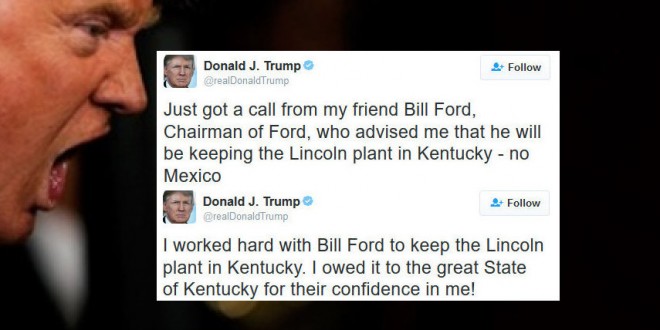 AGAIN: Trump Lies About Ford Not Moving Kentucky Plant To Mexico, Which They Never Said They Would Do

U.S. President-elect Donald Trump said Ford Motor Co Executive Chairman Bill Ford Jr told him the automaker would not move a Kentucky plant to Mexico, but the firm said it informed him the decision was to keep one vehicle in U.S. production.

But Ford has repeatedly said it has no plans to close any U.S. plants and likely could not do so under the terms of the current United Auto Workers contract that expires in 2019.

This is not the first time Trump’s comments about Ford production have been called into question. Last year, he took credit for Ford moving work from Mexico to Ohio, while the automaker had already made the decision in 2011 – long before Trump announced a run for president.