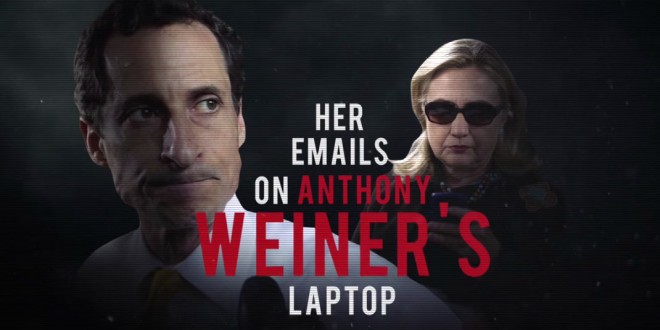 You’ll note that the ad shows Hillary coughing and features very unflattering photos much like the one used in the attack on Ted Cruz’s wife. Via TIME:

In a new ad released Thursday, Trump’s campaign highlights the FBI’s announcement that it found emails relevant to the investigation of Clinton’s private email server on a computer belonging to Weiner, the estranged husband of top Clinton aide Huma Abedin. “Decades of lies, cover-ups and scandal have finally caught up with Hillary Clinton,” a narrator said in the ad over images of Clinton coughing and shouting. “Hillary Clinton is Under FBI investigation again after her emails were found on pervert Anthony Weiner’s laptop.”

The ad wrongly asserts the new batch of emails belong to Clinton. In fact, they belong to her top aide, Huma Abedin, who is married to Weiner, a disgraced former congressman from New York. Investigators are still trying to figure out how many emails existed and their pertinence to the Clinton probe.

Comey’s decision to insert the bureau into the 2016 presidential campaign mere days before Nov. 8 set off a firestorm of criticism, from Democrats and Republicans alike. The move is especially perplexing given that Comey opposed signing on to a statement saying the Russian government was meddling in U.S. politics out of concern it would unduly affect the election.