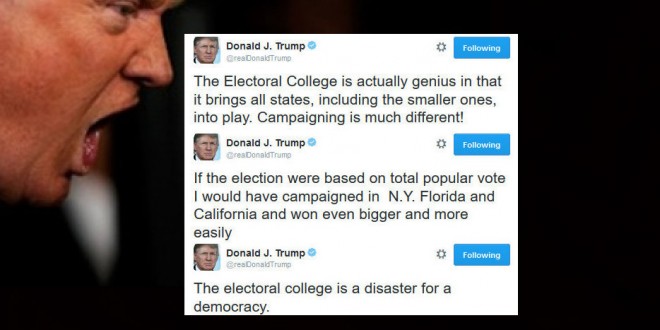 Trump Flip-Flops On The Electoral College

President-elect Donald Trump on Tuesday dismissed critics who point out that Hillary Clinton will likely win the overall popular vote despite losing the 2016 election. In a series of tweets Tuesday morning, Trump claimed that if the US did not adhere to its Electoral College system, which proportionally divvies out votes to states based on population, the real-estate mogul would’ve adopted a different campaign strategy altogether.

Trump wasn’t always so keen on the Electoral College. In a series of tweets after former Republican presidential nominee Mitt Romney’s loss in 2012, Trump lamented the Electoral College system, calling it a “disaster for democracy.” During an interview that aired Sunday on “60 Minutes, the president-elect claimed that he would love to have a popular vote election over the current Electoral College system. “I’m not going to change my mind just because I won. But I would rather see it where you went with simple votes,” Trump said.

That took an entire two days. All of the tweets below, which came when Trump wrongly believed that Romney had won the popular vote, have now been deleted.