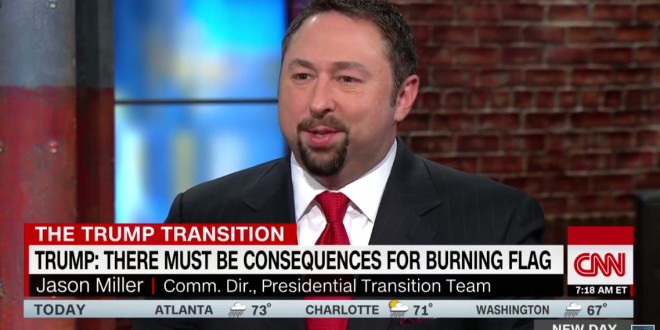 Well that didn’t take long. Within minutes of President-elect Donald Trump taking to Twitter to casually assert that people who burn the American flag should, in his words, face a “loss of citizenship or year in jail,” his team was already making the rounds defending the indefensible.

Jason Miller, the Communication Director for the Presidential Transition Team who previously served as a loyal surrogate to the GOP candidate, sat with CNN’s Chris Cuomo to discuss the newest cabinet appointments. But as happens when Trump shoots from the hip on Twitter, the conversation was derailed, forcing Cuomo (himself a lawyer) to press Miller directly about the boss’ bizarre statements.

Miller — just like at every turn on the campaign trail — doubled down and defending Trump’s wild assertions. “[Flag burning] is terrible and it’s despicable,” he told Cuomo. “It absolutely should be illegal,” he continued before trying to change the topic. The CNN New Day anchor continued, “It is a protected Constitutional right — can we agree on that?” “No, we completely disagree,” said Miller remarkably.

“Flag burning should be illegal,” @JasonMillerinDC says when asked about Trump’s tweet about potential punishments. https://t.co/Yp5c4Pcs5l

Previous Roger Stone: Trump Is More Likely To Prosecute Hillary Due To Her Campaign’s Support For The Recount
Next Trump Taps Leading Obamacare Critic To Run HHS