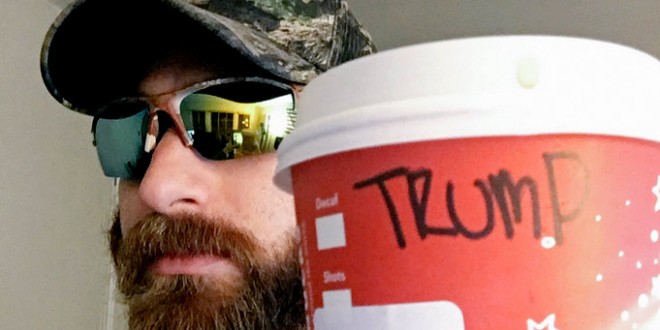 Donald Trump supporters have started asking for their Starbucks drinks under Trump’s name as a movement against the coffee giant. After a viral video showing a Trump supporter yelling at a barista gained traction on Wednesday, other supporters have banded together to protest what they view as political and anti-white discrimination. The man in the video told the Miami Herald that he was racially discriminated against and that the barista wouldn’t serve him because she knew he was a Trump supporter.

The protest is an attempt to make Starbucks baristas yell Trump’s name and write it on their coffee cups, as is the company’s regular practice. Some supporters claim to have been refused a #TrumpCup and see it as a breach of their rights. But others find the protest counterintuitive, as the plan relies on giving Starbucks money in the first place.

This all comes after the controversy that plagued Starbucks last year as it introduced a plain red holiday cup that was markedly different from Christmas cups in the past. Joshua Feuerstein, a former pastor, called the new cups a “war on Christmas” in a video posted to Facebook. But many social media users find the Starbucks protests old and tiresome.

Starbucks has responded to the protest by clarifying that it doesn’t require its partners to write or call out names. “Over the years, writing customer names on cups and calling out their names has been a fun ritual in our stores,” a Starbucks spokesperson said. “Rarely has it been abused or taken advantage of. We hope and trust that our customers will continue to honor that tradition.”

1) Go to Starbucks & tell them your name is Trump

2) If they refuse take video

Previous NEW YORK CITY: Rush Hour Gridlock As Trump Shuts Down Lincoln Tunnel So He Can Get To His Golf Club
Next IT’S LIKE CHRISTMAS: Nazis Celebrate Trump’s Picks