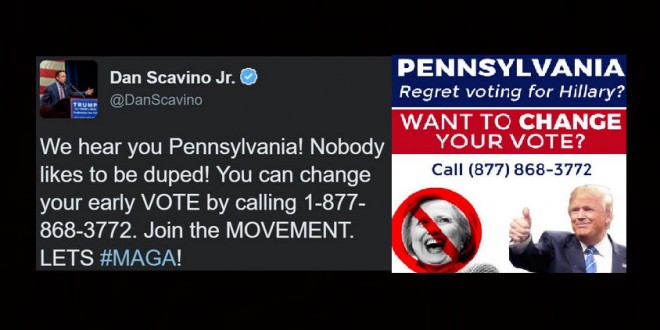 Republican presidential nominee Donald Trump’s campaign is encouraging early voters in Pennsylvania to find out how they can change their ballots. In a tweet posted early Tuesday morning, Trump adviser Dan Scavino provided a phone number for Pennsylvanians to call should they wish to change their “early vote.”

“We hear you Pennsylvania! Nobody likes to be duped! You can change your early VOTE by calling 1-877-868-3772. Join the MOVEMENT. LETS #MAGA!” the tweet, which was later deleted, read. The number Scavino posted connects callers to the Pennsylvania Department of State’s Bureau of Commissions, Elections, and Legislation.

Pennsylvania does not allow early in-person voting in the way states like Florida and North Carolina do. Pennsylvanians who want to vote early must request an absentee ballot through the mail and provide a reason as to why they cannot vote in person. Those who typically vote by an absentee ballot include college students, service members and their families.

The bottom of the absentee ballot request form includes a provision that reads: “Warning – If you are able to vote in person on election day, you must go to your polling place, void your absentee ballot and vote there.”

Don't worry @DanScavino, I saved that deleted tweet for you pic.twitter.com/echevZzXnz

Looking to change early VOTE/ABSENTEE in Pennsylvania, Michigan, Minnesota, or Wisconsin!?Feeling duped? Despite reports you cant, you can!👇 pic.twitter.com/GSXc6a3GVt