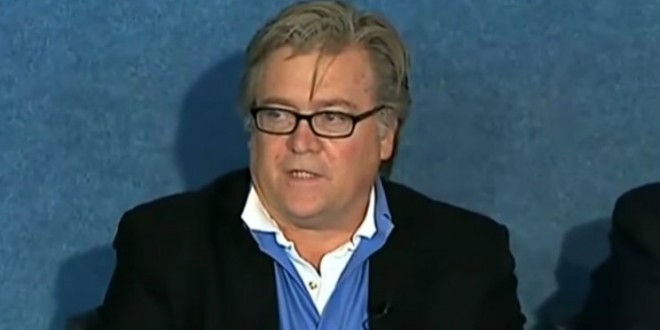 During the same four-year period, the charity paid about $1.3 million in salaries to two other journalists who said they put in 40 hours a week there while also working for the politically conservative news outlet, according to publicly available documents filed with the Internal Revenue Service.

The salary payments are one part of a close relationship between the nonprofit Government Accountability Institute, a conservative investigative research organization, and for-profit Breitbart News. The ties between the Government Accountability Institute (GAI) and Breitbart call into question the assertions the institute made in filings to the IRS that it is an independent, nonpartisan operation, according to philanthropic specialists and former IRS officials.

Bannon launched the institute in 2012, shortly after taking the helm of Breitbart. He sought tax-exempt status from the IRS by describing the institute as an education group to help the United States and other countries maintain a “higher quality of life” through “promotion of economic freedom,” according to IRS filings.

But from its inception, the institute has been closely tied through personnel and donations to a network of nonprofit organizations that have pushed a conservative agenda, in part through highly critical reports about Clinton and the Obama administration, according to IRS filings from multiple organizations. The institute received nearly $4 million in donations between 2012 and 2014 from two conservative charities — Donors Trust and the Mercer Family Foundation.

Under federal code, tax-exempt groups known as 501(c)3 public charities must “not participate in, or intervene in [including the publishing or distributing of statements], any political campaign on behalf of [or in opposition to] any candidate for public office.”

There’s much more about the scam at the link.