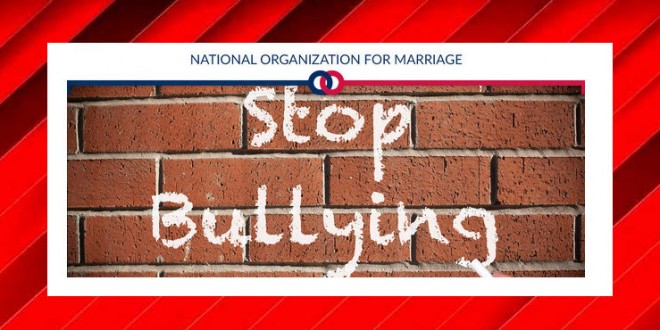 LGBT activists and the left often talk about the need to reduce bullying as a means of justifying their extreme agenda. They want to play on the emotions of the American people to portray gays, lesbians and the transgender as victims of intolerance and harassment. But the reality is much different — it’s believers in traditional values and morality who are victims of bullying, often by activists in the LGBT community. NOM is at the forefront of the effort to protect Christians and other people of faith from being discriminated against simply for standing for the truth of marriage, gender and religious liberty.

We are also at the forefront of the effort to fight President Obama, Hillary Clinton, LGBT extremists and their allies in big corporations and Hollywood from redefining gender and allowing men, including convicted sex offenders and pedophiles, from gaining access to intimate facilities like bathrooms and showers that are reserved for girls and women. We are making great progress and are on a path toward victory.

We have a real opportunity to advance the First Amendment Defense Act this fall after the election. And just last week, we won a tremendous victory when the US Supreme Court agreed with our request to accept the G.G. case, giving us the opportunity to defeat the dangerous gender agenda being advanced by President Obama, Hillary Clinton and LGBT extremists.

NOM filed a brief with the Supreme Court asking them to accept the G.G. case, and now that this case will be decided by our country’s highest court, we can put an end to attempts by the left to redefine “sex” under federal law to mean “gender identity” and then declare it “discrimination” to prevent someone who “identifies” as the opposite gender from accessing intimate facilities like showers and locker room reserved for that gender.

But we can’t protect the right of Americans to believe in marriage and defend the reality of gender without the financial resources we need to be effective. Please help us capitalize on the opportunities before us by making a financial contribution today of $25, $35, $50, $100, $250 or $500 or more.

Perhaps obviously, the Supreme Court did not “agree” with their request to take the transgender rights case. NOM was merely one of many anti-LGBT hate groups that submitted an amicus brief.