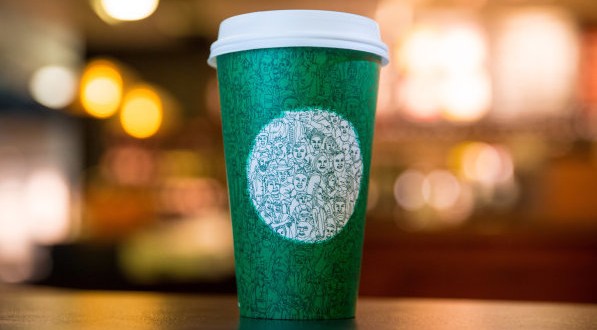 Starbucks issued a new green cup yesterday and the usual nutjobs are losing their minds. And this isn’t even their holiday cup. Via press release from Starbucks:

A single line connects the figures. A coffee farmer, a family, a barista, friends embracing. A mosaic of more than a hundred people drawn in one continuous stroke is featured on a new Starbucks green cup. The new green cup is available exclusively in U.S. Starbucks stores starting today (November 1), for a limited time while supplies last.

“The green cup and the design represent the connections Starbucks has as a community with its partners (employees) and customers. During a divisive time in our country, Starbucks wanted to create a symbol of unity as a reminder of our shared values, and the need to be good to each other,” said Howard Schultz, chairman and ceo.

Starbucks commissioned artist Shogo Ota to create the artwork. His threaded design represents shared humanity and connection, serving as a symbol for stitching people together as a united community.

Seattle-based coffee giant Starbucks unveiled a new “Green Cup” Tuesday that is meant to symbolize unity ahead of the election. But the timing of the cup’s release, as well as it’s political message, drew swift and harsh criticism on social media.

Some Twitter users threatened to boycott the company in response to the cup, accusing Starbucks of “political brainwashing” and spreading “liberal bias” by wading into the election. Others were upset that the company’s cup did not carry a stronger holiday message and accused the company of attacking Christian values.

@Starbucks Screw you. My coffee should NOT (and does NOT) come with political brainwashing. I dropped @Starbucks like a hot rock.