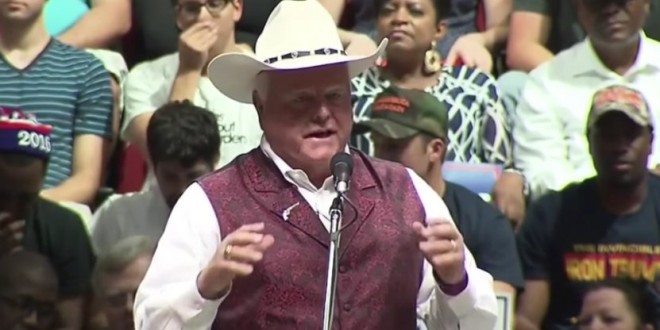 Texas Agriculture Commissioner Sid Miller, a Republican statewide office holder, called Hillary Clinton, the Democratic nominee for president, a “c–t” in a tweet Tuesday afternoon. His office said the tweet was a result of a hack.

In the since-deleted tweet, Miller was citing a “new auto alliance poll,” which had Donald Trump, the Republican nominee for president, up by one point in the polls at 44 and Clinton, or as Miller referenced her, “c–t,” was at 43. He then cheered on the reality star with a week left to go until Election Day by saying: “Go Trump Go!”

“We’re trying to get to the bottom of it. We think we’ve been hacked,” said Mark Loeffler, communications director for the Texas Department of Agriculture, in an interview with mySA.com. Miller lists himself as a “deplorable” in his Twitter bio, which references his support for Trump. Miller, who has a history of posting controversial statements and photos on social media, deleted the tweet within about 10 minutes of posting it.

Miller’s campaign page brags that he and his wife founded a local church to “spread the gospel of Jesus Christ.”