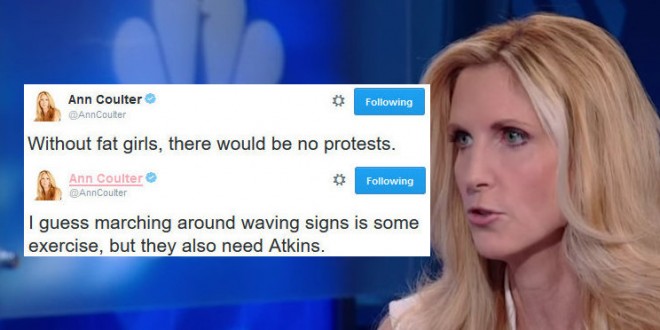 For the last eight years the right wing has relentlessly mocked Michelle Obama’s platform of encouraging children to exercise and eat healthy foods. Every White House state dinner menu was gleefully posted to note lavish desserts or entrees with cream sauce. Breitbart writers and commenters in particular were fond of calling the First Lady a “food Nazi” and similar, often racially-tinged epithets. It will, therefore, be fascinating to see how they react to Melania Trump’s announced plan to combat the cyber-cruelty that was the social media hallmark of Donald Trump’s campaign. Case in point #1 is Ann Coulter, as she so vividly demonstrated this week.

I guess marching around waving signs is some exercise, but they also need Atkins. pic.twitter.com/ZmQ62nh44n

Without fat girls, there would be no protests. pic.twitter.com/Qmd7XE0CJC

Previous Lindsey Graham: Trump Should Nominate Ted Cruz To SCOTUS And Democrats Better Not Try To Block Him
Next Bill Donohue: Macy’s Employees Should Call In Sick On Thanksgiving To Protest Their Anti-Catholic Bosses