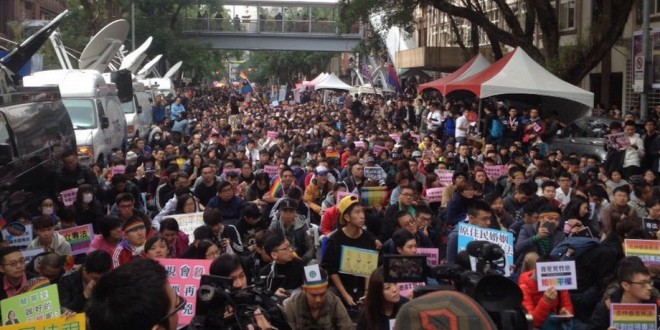 More than 10,000 same-sex marriage advocates held a sit-in outside the Legislature on Monday, the day of the last public hearing before a legislative committee proceeds with the second reading of a bill that would legalize same-sex marriage. Supporters waved rainbow flags and held banners reading “no discount on human rights,” and “special treatment is discrimination,” as they staged a peaceful sit-in outside the Legislative Yuan, urging marriage equality.

Inside the Legislative Yuan, experts, civic groups and legislators debated whether the legalization of same-sex marriage would benefit society. At the core of the debate is whether the protection of same-sex couples’ human rights could go as far as an amendment to the nation’s fundamental law.

Opponents argued that instead of amending the Civil Code, a special partnership act could guarantee same-sex couples spousal rights equivalent to those entitled to heterosexual couples by law. Taiwan’s aging society already suffers a declining birth rate, and the state could be encouraging homosexuality by legalizing same-sex marriage,” Hsu Shan-jing (徐山靜), medical consultant at Chiayi Christian Hospital said on Monday.

“And that would further worsen the situation because same-sex couples cannot produce children,” Hsu said. Jennifer Lu (呂欣潔), a senior researcher at the Taiwan LGBT Hotline Association and a social media celebrity, responded to the argument with a simple question: “Does society really expect same-sex couples to become heterosexual and produce children because the law denies their right to marry?”

Previous WAR ON CHRISTMAS: South Carolina Gun Dealer Launches Holiday Billboard Campaign With AR-15s
Next Ivanka Trump’s Shoe Factory Is Moving From China To Ethiopia Because Labor Costs There Are Much Cheaper