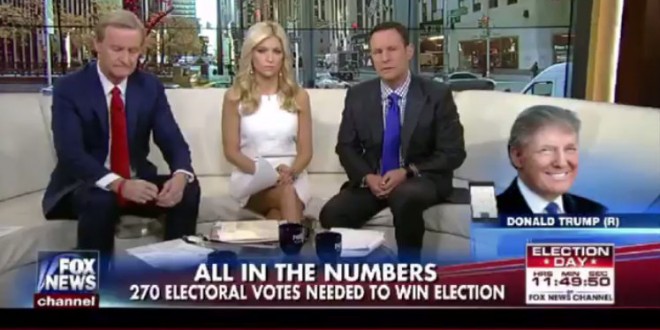 As Trump closed out his campaign, he remained true to form, often rambling off topic during the 15-minute phone interview — demonstrating the kind of shaky message discipline that’s endeared him to many supporters but horrified political operatives.

“Well, it’s very exciting,” Trump said about Election Day. “You know, I’ve spoken to you folks for a lot during our very successful primaries. Oftentimes, every single one I was speaking to you in the morning so I’m a little bit superstitious. So when you said please call, I said I’ll call. But I won many primaries speaking to you first thing in the morning so I’m gonna keep that string going.”

The reality TV star also maintained that New England Patriots star quarterback Tom Brady and his head coach, Bill Belichick, endorsed his campaign this week. Trump said he got a call from Brady and a letter from Belichick, both of whom he said told him he could announce their support.

“They’re friends of mine,” Trump said. “And they’re great people and great champions.” The Patriots organization declined to comment on the veracity of his claims, but Brady’s wife allegedly denied that her husband is backing the brash billionaire with an emphatic “NO!” in an Instagram comment.

TRUMP: I’m filling up rooms on the basis of what I’m saying; people left the Clinton rally when the performance was over. pic.twitter.com/Vdh37Htzqp

Previous Under Ann Coulter’s Nazi Voting Plan, Donald Trump And His Children Would Not Be Allowed To Vote
Next Rep. Steve King Vows That House Judiciary Committee Will Move To Impeach Hillary Before Inauguration Day