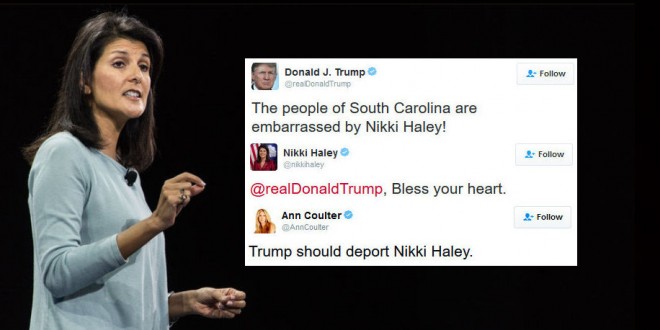 Earlier this year Donald Trump attacked South Carolina Gov. Nikki Haley after she criticized his plan to ban Muslim immigration. Haley responded with “bless your heart,” which is Southern for “go fuck yourself.” Her tweet prompted Ann Coulter to react in her typically racist fashion. (Haley was born in South Carolina.) But hey, it’s all good now, right?

Gov. Nikki Haley is scheduled to meet with President-elect Donald Trump Thursday amid growing reports she is being considered for a spot in his administration. News of the meeting, set for the morning in New York, began to filter out late Wednesday night from multiple press outlets. It also came after Trump-ally Lt. Gov. Henry McMaster told The Post and Courier earlier in the day he and Haley are being considered for Cabinet positions in Trump’s White House.

McMaster said Haley is being considered for several posts including secretary of state. McMaster, one of Trump’s earliest statewide political endorsers, said the daughter of Indian immigrants could provide a fresh set of eyes on foreign affairs. “It would be like how Mr. Trump is bringing fresh eyes to running our government,” he said. McMaster said he has been speaking with the Trump transition team about becoming attorney general. McMaster was a U.S. attorney and the elected state attorney general before becoming lieutenant governor.

While Trump supporters have been encouraging outsiders in the government as part of Trump’s election mandate, some say questions can be raised about Haley’s preparedness to serve as secretary of state. College of Charleston political scientist Kendra Stewart said there is very little in Haley’s resume covering matters of foreign affairs.

“Secretary of state is going to be a bit of a stretch for Haley’s area of expertise,” she said, adding that Haley has yet to be vetted about foreign policy, trade and protectionism. It also might be difficult for Haley, a daughter of Indian immigrants, to enthusiastically support Trump’s anti-immigrant platforms that surfaced during the primary period. A U.S. Department of Commerce post may be more in line with her skill set, Stewart said.