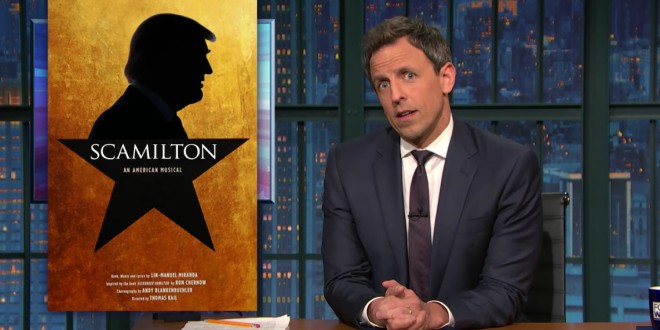 As Meyers notes, Trump’s apparent beef with Hamilton is a diversion from some of the president-elect’s other, more unsavory stories from over the weekend. Specifically, Meyers refers to Trump settling for $25 million over fraud lawsuits with Trump University. “As fun as it is to talk about this Hamilton feud, it’s just a distraction from a far bigger story,” Meyers adds. “A story that will one day be told in the hit Donald Trump musical, Scamilton.”

Other stories related to Trump from the weekend that the president-elect would rather not focus on: His controversial appointment of Alabama Sen. Jeff Sessions, who has a history of racial comments; hate crimes committed in Trump’s name; and the potential conflicts of interest between Trump’s presidency and his personal brand. Per Meyers, it’s already taking shape in Trump’s new hotel in Washington, D.C., as he’s reportedly enticing foreign diplomats to stay at the hotel.