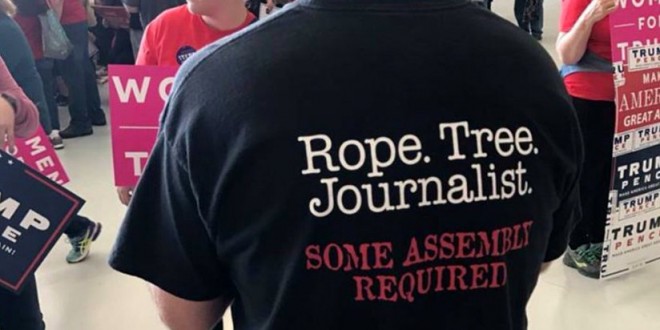 A Donald Trump supporter’s T-shirt calling for the lynching of journalists went viral Sunday, after it was spotted at the GOP nominee’s rally in Minnesota. “Rope. Tree. Journalist,” the shirt read. “Some assembly required.” The man wearing the shirt was photographed at a Trump rally in Minneapolis, Minn., on Sunday. Trump has frequently slammed the media, calling coverage of his campaign vs. that of his rival Hillary Clinton’s “rigged” and “dishonest.” At a rally in Pennsylvania later Sunday, the GOP nominee said journalists “are the most biased and dishonest people.”

The shirt had been available on Zazzle, but the seller’s account was deleted late last night.

Thank you, Donald Trump, for empowering people so unclever that they call me "Kikeberg" in their death threats:https://t.co/TbQofshj6k