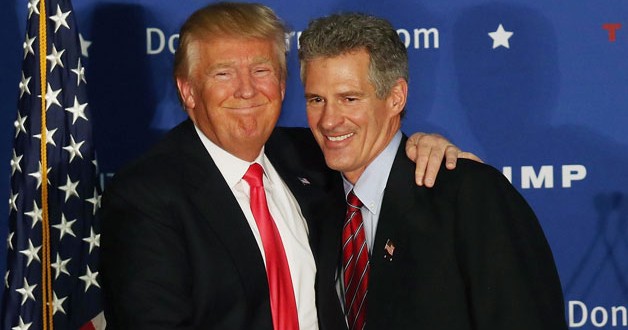 Scott Brown: It’s No Secret That Massachusetts Voters Drove Up To New Hampshire To Vote There Too

Scott Brown suggested Wednesday that Massachusetts voters could have driven north to the swing state of New Hampshire to commit voter fraud in this month’s presidential election, a claim the former Massachusetts senator made without providing any proof.

Joining Herald Radio for his monthly on-air spongebath, the Trump surrogate expounded on the president-elect’s allegation of “serious voter fraud” in the Granite State, which Democratic candidate Hillary Clinton won. “The people need to understand, people from Massachusetts could’ve gone up and voted that day. And quite frankly, some do. It’s well-known. It’s no secret,” Brown said.

Brown, who lost a 2014 Senate race in New Hampshire to Democrat Jean Shaheen, said Massachusetts voters drive to polling locations north of the border, ask to vote, claim they’re “domicile,” and when they can’t provide an ID, fill out an affidavit giving them the green light. “To think 100,000 people all of a sudden in this election, and 40,000 people in my election, all of a sudden say, ‘Oh my gosh, there’s an election today!’ It’s laughable,” Brown said.