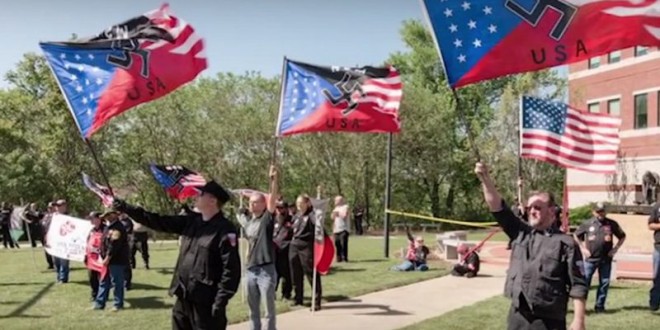 Hoping to build on the visibility and energy Trump has brought to their movement, a group of white nationalist leaders met in Georgia in April to try to overcome a history of personal and organizational rivalries and hammer out a new working partnership, which they called the Aryan National Alliance.

Since then, Matthew Heimbach of the Traditionalist Workers Party has been working to flesh out the group’s statement of principles to help “pro-White” groups work together more effectively to build a whites-only “ethno-state” in North America. A few days ago, Heimbach’s radio show featured “Commander” Jeff Schoep (pronounced “scoop”) from the National Socialist Movement and one of the leaders of the new unity movement.

Schoep announced that the Aryan National Alliance is changing its name to the Nationalist Front, and that its coming out party will be a rally at the Pennsylvania State Capitol in Harrisburg this Saturday, November 5. Schoep said a new organizational website will be launched before the event; the Traditionalist Workers Party’s propaganda director Jason Augustus, founder of the “Pro-European Metalcore” band “14 Sacred Words,” is developing the Nationalist Front’s new logo and graphics. The “14 words” refer to a white supremacist motto. Previous TEXAS: Christian GOP State Agriculture Commissioner Calls Hillary The C-Word In Now Deleted Tweet
Next CNN Guest Drops The Mic On Lewandowski: Listen, I’m Not Getting Paid By One Of The Candidates [VIDEO]