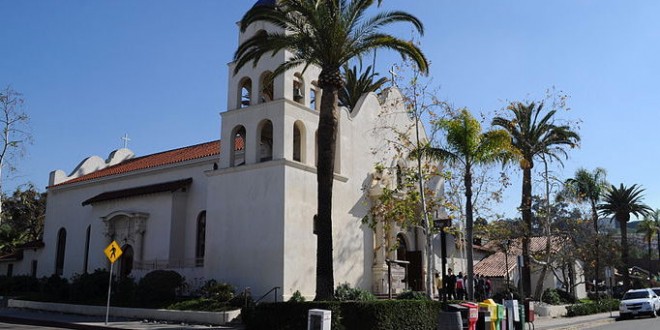 San Diego Catholic Church: It’s A Mortal Sin To Vote For Democrats (And Hillary Is Totally Possessed By Satan)

Between requests for prayers for the sick and a notice for an upcoming chastity luncheon, a newsletter from a Catholic church in Old Town that doubles as an election-day polling site included a flier that told parishioners they’ll go to hell if they vote for Democrats. Two Sundays later, the message had changed: Satan was working through former Secretary of State Hillary Clinton.

The Oct. 16 bulletin from the Immaculate Conception Catholic Church was stuffed with a flyer written in both English and Spanish that cited five legislative policies — support for abortion, same-sex marriage, euthanasia, human cloning, and embryonic stem cell research — that will doom a politician and their supporters to eternal damnation.

“It is a mortal sin to vote Democrat … immediately after death the souls of those who die in a state of mortal sin descend into hell,” the flyer said. It cited the five public policy issues from the “Voters Guide for Serious Catholics” and said that Democrats violate each of them, while Republicans cross none.

The political messages continued as early voting began and the election drew closer. An article in the Oct. 30 the church bulletin claimed that Clinton is influenced by Satan. The bulletin took a quote from a 2015 speech by Clinton out of context to make it appear that through Satanic intervention the Democratic nominee, using techniques from trailblazing community organizer Saul Alinsky, was telling Christians to change their religious beliefs to support abortion.

“The devil does this through tactics outlined by Saul Alinsky with the outcome as Hillary Clinton stated ‘And deep-seated cultural codes, religious beliefs and structural biases have to be changed,’ to draw us away from God’s teachings regarding the sanctity of life to those of the world and its prince,” the bulletin said.

The Diocese Of San Diego has distanced themselves from parish, saying the Catholic Church takes no official position on elections.