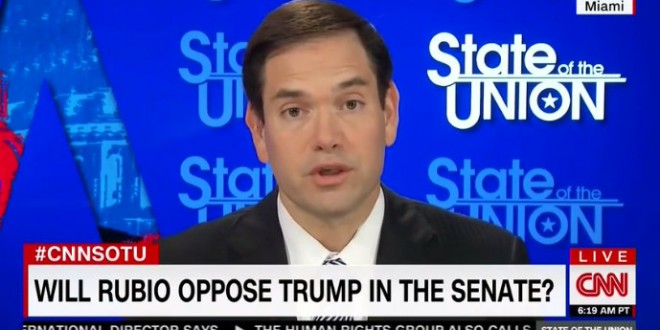 Appearing on CNN’s State of the Union, host Dana Bash reminded the Florida senator that he once called Trump unfit for the office of the presidency, and warned against “turning over the nuclear codes to an erratic individual.” “Senator, do you still have those concerns about President-elect Trump?” Bash asked.

“Well, Dana, we had an election,” Rubio replied. “Ultimately the voters chose him both as our nominee and now as our president. The election is over and it’s time to govern. We’ll give him every chance to be successful. That’s what I”m focused on now. At some point elections end and governing needs to begin.”

Previous Reince Priebus: Jill Stein’s Fraudulent Recount Effort Is a Hypocritical Joke And Total Waste Of Time [VIDEO]
Next Nigel Farage: I Live In Fear For My Life