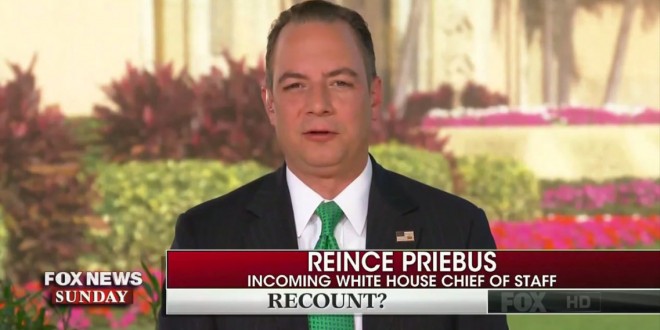 On this week’s edition of ‘Fox News Sunday,’ RNC Chairman and incoming White House chief-of-staff Reince Priebus says that the effort from Jill Stein’s campaign to recount votes in Michigan and Wisconsin is a waste of time, money and effort.

“It was their team that cut a deal with our team that said when the AP called the race, they would call within 15 minutes and concede– and they did. It is a total and complete hypocritical joke that the group of people that thought they were nervous about President-elect Trump not conceding are the people that are conducting recounts in states where we won by 68,000 votes.”

Previous Bernie Sanders Shrugs Off Recount Effort: It’s Not A Big Deal And Nobody Expects Profound Changes [VIDEO]
Next Rubio Squirms When Asked About His Campaign Claim That Trump Can’t Be Trusted With Nukes [VIDEO]