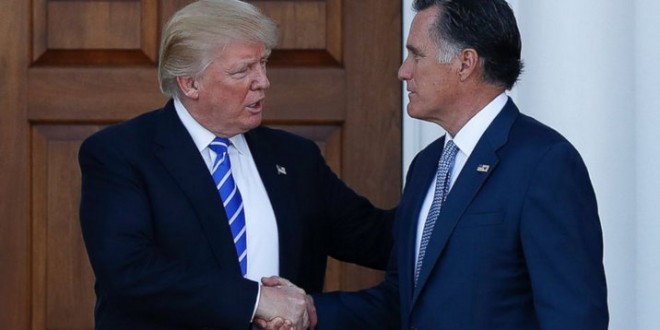 REPORT: Trump May Force Romney To Make Public Apology Before Getting Secretary Of State Nomination

According to Fox News’ Ed Henry, President-elect Donald Trump may make things a little more difficult for Mitt Romney if he hopes to become our nation’s next Secretary of State. A senior transition official tells Henry that they are considering whether he has to issue a public apology for his past severe anti-Trump rhetoric.

Romney called the real estate mogul a “phony and a fraud,” in that March address, continuing, “There is a dark irony in his boasts of his sexual exploits during the Vietnam War, while at the same time, John McCain — who he has mocked — was imprisoned and tortured.”

Trump in response called Romney “irrelevant,” and said that the former Massachusetts Gov “failed badly,” in his own quest for the Presidency. Romney visited with Trump last week in Bedminster, New Jersey and said that the meeting was a “very thorough and in-depth discussion in the time we had.”