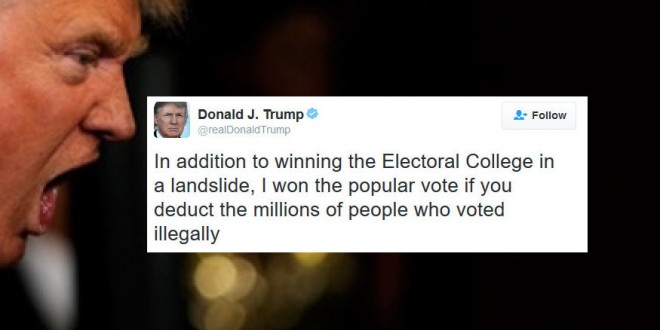 This afternoon Donald Trump issued two more ranting tweets about the recount effort, laughably claiming that he actually won the popular vote because millions of people voted illegally for Hillary Clinton. Trump has been melting down about the recount since early this morning and has posted a total of ten tweets so far today. At this writing Hillary leads the popular vote count by more than 2.2 million, with many votes still outstanding.

In addition to winning the Electoral College in a landslide, I won the popular vote if you deduct the millions of people who voted illegally

states instead of the 15 states that I visited. I would have won even more easily and convincingly (but smaller states are forgotten)!

Donald Trump tweeted falsely on Sunday that millions of people voted illegally in November’s presidential election. There is no evidence to support Trump’s claim, which marks an unprecedented rebuke of the U.S. voting system for a president-elect. Stories about 3 million illegal votes in the 2016 general election have been popular in some right-wing circles, popularized by Alex Jones, Milo Yiannopoulos and others. No evidence exists that those stories are correct.